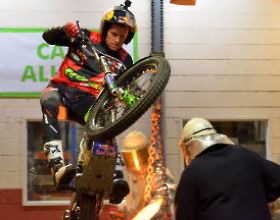 For those of us lucky enough to see the stunts first hand, that cold Sunday in March, when filming of the new video took place, it is particularly cool to see how all the pieces come together in the final version - launched today. A big thank you has to go to Dougie Lampkin MBE for making this possible. His input was invaluable, along with filmmaker Sam and crew.

For those watching the video for the first time, it is clear why Dougie is a twelve times Trial World Champion. His thrilling two minute ride through our Manchester heat treatment plant proves there is no obstacle too high – or too hot!. It is an exciting and engaging way to show a brief glimpse into the world of metal heat treatment.

“Dougie is a high profile professional motorcycle sportsman, so this also fits nicely with our autosports market and by association other industries such as aerospace that share the same requirements,” Howard Maher explained.

Dougie’s professional career began over 25 years ago. He received his first trophy in 1991, collecting much more silverware right up to 2017 and he aims to add to his horde in 2018. Awarded an MBE in 2001, his autobiography, Dougie Lampkin – Trials and Error, was launched on May 17th this year and we would like to wish him every success.

“We are really pleased with the video and it was a pleasure opening up the works to Dougie’s special way of riding. And our resident health and safety Tsar can breathe a sigh of relief that nothing went wrong on the day! We will be running the video on our stand 2427 at the upcoming Farnborough International Airshow in July. I am sure it will help us draw attention to the stand,” Howard concluded.