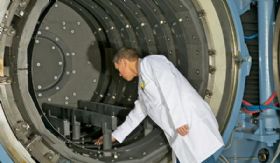 After 40 years working for Wallwork, Frank Skelton retires in May

We caught up with him after a weekend of nights supervising the heat treatment at the Manchester (Bury) site.

Frank explained, “I left school at sixteen and started my career as a trainee lab technician at a Rochdale foundry in 1967. I learned the basics of metallurgy on the job. By day-release and night school study at the local FE college I became a degree level qualified metallurgist.”

Frank joined Wallwork ten years later when the company was based in Stalybridge and Robert Wallwork, the company founder, was still running the business. In the same year NASA launched voyager one to Jupiter, Elvis died and Bury FC beat Cambridge United 5-2.

“I enjoy overseeing the heat treatment, both the aerospace and the commercial work.  There is a lot of variety and technical challenges created by new materials, different components and constant change so that no two shifts are ever the same. Over the years I have expanded my knowledge and experience and have always been willing to share this with colleagues. One of the strengths of Wallwork is this shared experience that contributes to our reputation for quality and service,” Frank noted.

Frank will be missed as part of the team. He will be heading for France to live on the channel coast, close to the Belgian border with his French girlfriend, no doubt enjoying better weather, good food, fine wine – but yearning for a Bury black pudding. It is thanks to Frank and the other stalwarts that we are able to run a 24/7 operation and give so many customers next day returns on their heat treated components.