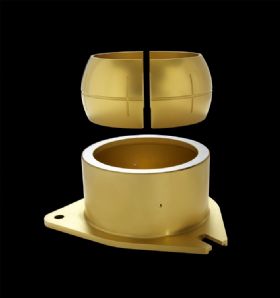 Wallwork Cambridge's Nitron O treatment, developed and enhanced over a number of years, is the first commercial duplex process for Titanium Alloys where the heat treatment and coating phases are administered in one single cycle within the same chamber. Ongoing development work is ensuring that continual improvements are being made to this very novel process

This treatment is allowing Titanium alloys to be used in structural applications where high loads are applied to the component surface. Normally the material of choice would be steel, however with the Nitron O process applied, Titanium alloys can be substituted providing comparable mechanical performance to Fe alloys but with over 50% weight saving. An ideal scenario for Aerospace components in the modern world

Metal-to-Metal spherical bearings are used within the aerospace industry and have particular application potential within landing gear bearings in aircraft. Conventional materials used in the production of such bearings are stainless steel and copper alloy for the inner and outer races.

This material selection is founded on their ability not to gall under non or low lubrication conditions. However, they are relatively heavy materials so over the past few years solutions have been sought to utilise more lightweight materials. It is possible to replace these relatively heavy materials on a strength basis with titanium alloy bearings which are approximately 50% lighter

Titanium alloys have very attractive strengths-to-weight ratios, good fatigue strength and outstanding corrosion resistance. However they also demonstrate very poor tribological characteristics in terms of coefficient of friction and the propensity for metal to metal adhesion or galling.

In moderate loaded applications the surface performance can be greatly enhanced by a deposition of PVD Titanium or Chromium Nitride. However, in higher loaded situations the use of coatings on their own will not necessarily improve the surface properties of the Titanium alloys mainly due to the low hardness of the substrate. A further process is required to improve the load bearing capacity of the material which can subsequently enhance the benefits of the PVD coating.

Wallwork Cambridge have developed the Nitron O process to solve this problem. The components are treated using a duplex process in which a nitride diffusion zone is produced beneath a hard thin film Physical Vapour Deposition coating.

Plasma nitriding is carried out on the Ti-6Al-4V alloy using a D.C. triode configuration in a PAPVD coating system designed and built by TecVac. The results clearly demonstrate that for the Ti-6Al-4V alloy, hardening seems to be mainly accomplished by the incorporation of nitrogen in the a-Ti phase at temperatures up to 700oC. For these conditions, the maximum surface hardness (560-600 HV0.05) and nitrided layer depth (30-40 microns) were achieved at 700oC. At 800oC, a titanium nitride layer (Ti2N) was formed on the surface. The higher ionisation levels achieved using a TPN process reduced the treatment time and nitriding temperature required to obtain hard and reasonably deep nitrided cases in the Titanium alloy. Figure 1 above show the effect on hardness that the TPN treatment provides

Depending on the TPN processing temperature - hardness within the [typically] 20 micron diffusion zone can be elevated to around 750Hv with values of ~ 500Hv deep into zone at 15 microns. This provides a tremendous platform for the subsequent PVD coating of either Titanium or Chromium Nitride. The enhanced substrate effectively provides a steel-like base thereby facilitating the use of Titanium alloys in highly loaded mechanical components such as bearings and struts.

The wear results of unprocessed, Tin Coated and Nitron O duplex Ti6Al4V have been plotted in the Figure 1 above, the enhanced TPN treatment in conjunction with the PVD coating results in a marked improvement in the wear resistance of the Ti6Al4V alloy. The formation of the hard compound layer in the nitrided surface enhased by the super hard low friction thin film coating is directly responsible for the lower weight loss. Indeed in our tests wear rates compared to the untreated alloy are hundreds of percent lower. The improvement over the coated non nitrided sample is also significantly lower demonstrating that whilst the TiN coating can offer wear protection under higher loads the coating will eventually subside as a result of the softer alloy substrate.

This effect is shown even more markedly in Figure 3. In this more arduous Pin on Disc wear test, we are only looking at the Nitrided surface and consider the wear rates of unprocessed and Nitrided samples. The test also considers the effect of surface finish of both samples. The discs (finsihed to 0.2Ra and 0.8Ra respectively) are subjected to a loaded pin manufacturerd from both Alumina and heat treated 440C Steel. The most obvious conclusion that can be gained from the graph is that the surface finish of the substrate plays a major factor in subsequent improvements in abrasive wear resistance of the Titanium alloy

Similarly, Adhesion as expressed by critical load values LC1, LC2 and LC3[1] are demonstrated in figure 4 below. The effect of the TPN treatment prior to PVD coating are evident in the far higher critical load

values at each criteria. The Nitrided Ti-6l-4V samples demonstrate a 10 fold adhesion improvement at (LC2) and a 2.5 times higher adhesion load potential when tested to full coating breakthrough potential (LC3). Evidence again that enhancing the hardness of the Ti-alloy by TPN treatment radically improves the load bearing potential by nitride diffusion when compared with the untreated PVD coated sample.

[2] The Knoop hardness test is a microhardness test - a test for mechanical hardness used particularly for very brittle materials or thin sheets, where only a small indentation may be made for testing purposes